The Importance of Cooking With Toddlers 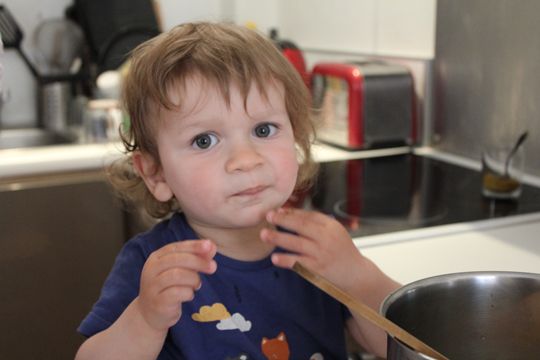 As soon as your little ones can stand they can cook. I am using the word cook in the loosest sense of the word here. Let me begin with the utmost honesty Sebastian is not a great eater. Well that is half true, let me tell you his tale of weaning to give you a full picture.
I breastfed my son and I was more than happy to do so. Joe really wanted to give Sebastian a bottle so he could bond or take him out for an afternoon. So I sat with the breast pump, I won’t bore you with the details but let’s just say nursing is a dream and using a pump is hell. Time after time I would fill a bottle and Seb would refuse it in the most dramatic way possible, we tried every trick that the internet, friends and family had to offer in the end I was close to a breakdown and just said no more. When he was 6 months old we started the Baby Led Weaning Process. Everyone who had seen my tears over the bottle attempts had assured me that food weaning was fun. Again food was offered and apart from sucking on bread or a rice cake everything was rejected. So I tried the old school mush method that was even more unsuccessful. The worst thing was I was so excited to cook for him, I wanted him to have fun exploring food, he just was not interested. I tried to remain calm knowing that babies do not starve themselves but secretly becoming bitter when I saw another baby eating. Really giving other people’s babies stabby eyes is not my proudest moment but there you have it the truth is out bloggers are not perfect. 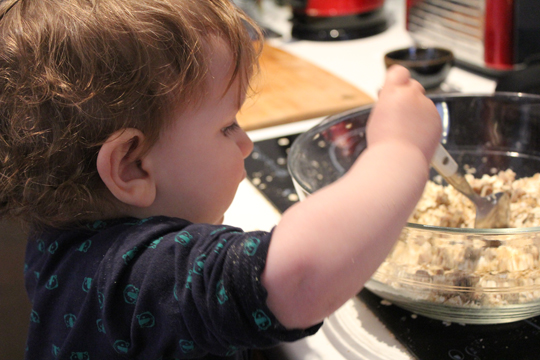 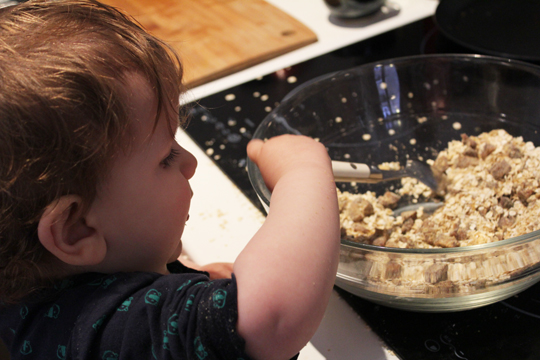 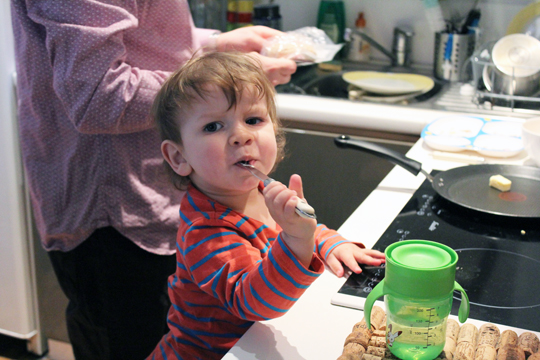 Time marched on, I would search his nappies for any semblance of solid matter, again not my proudest moment. Then at about 13 months he just decided now is the time. Now Sebastian eats everything. He eats a much smaller amount than other babies but he will try anything and likes all manner of odd flavours for a baby. I fully believe that the turning point came when he started to ‘get involved’ in the cooking process. 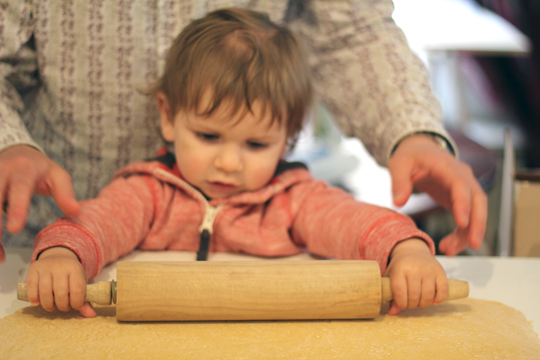 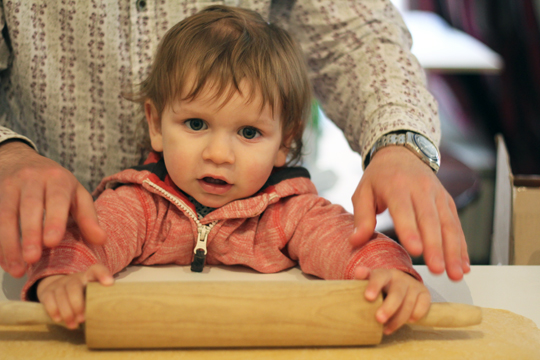 There are so many ways to involve your little ones in the kitchen and they are all messy so step one is embrace the mess, they are learning and you can clean up. Let’s face it they make mess all the time so let the mess be productive mess. 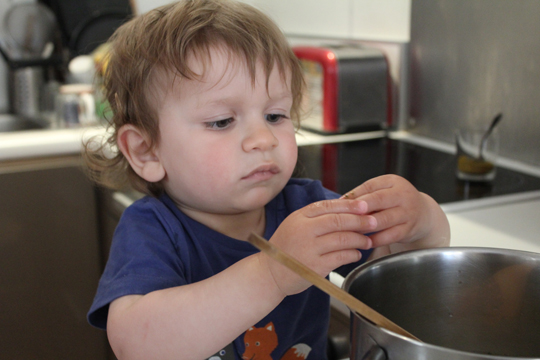 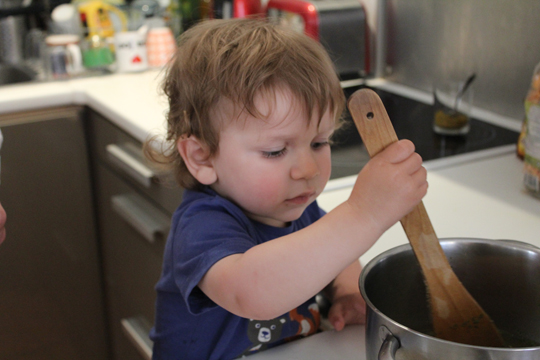 Invent tasks that don’t really need doing. For example putting ingredients into a bowl. If it is something that was in a tin like sweetcorn you will need to put it into a smaller bowl or plate so there is no chance of your child cutting themselves. Think of yourself as the runner who prepares everything for the TV chef. 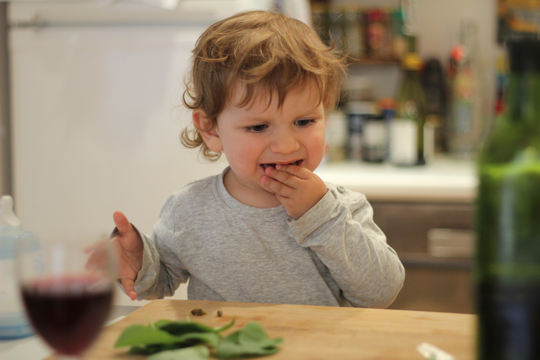 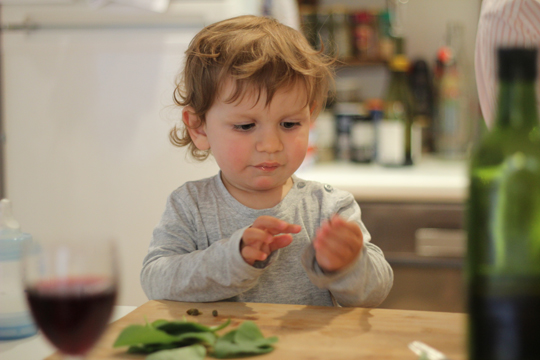 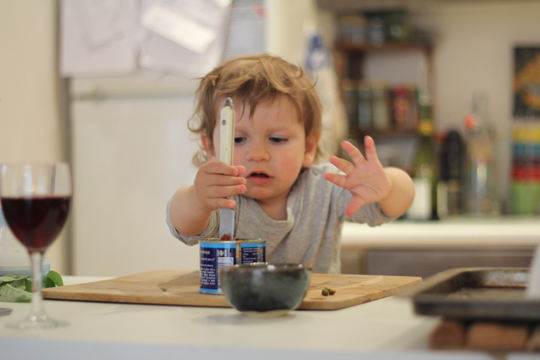 Stirring and rolling are other great activities. Using pastry cutters, whisks anything that will not result in baby death or burning. When you are cooking with your toddler/child you need to accept that food will not be as perfect as you like it. I ate a chilli that was very very heavy on cumin and that was okay. Pastry will not be rolled to perfection, cakes may be a little flat it is all okay. When I used to cook with my little sister I was far more controlling and she had better results but less ownership and did not care about eating the results. I have learned my lesson and Sebastian has ownership and he ate the cumin heavy chilli with gusto. 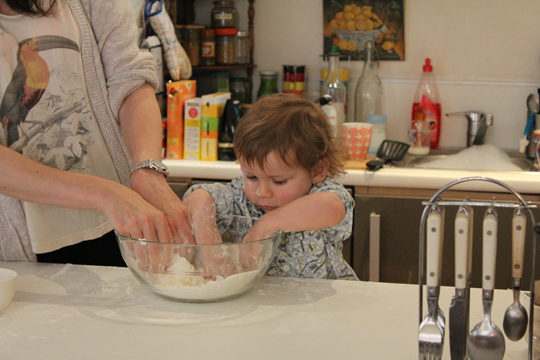 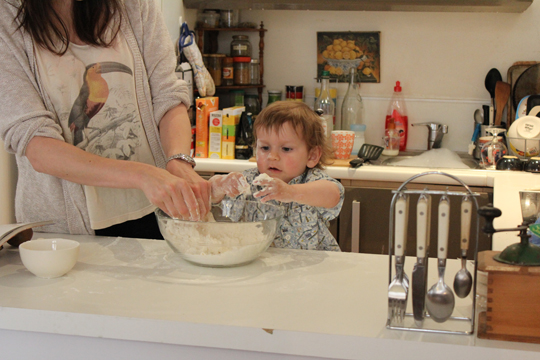 Food is a wonderful sensory experience allowing them to touch and smell and see food at the different stages enhances the part where they eat it. Cooking also teaches little ones about time and patience. They will learn the process of creating a finished product. Children really benefit from tasks where they have a visual result to show for the fruits of their labour. This is especially important at the toddler stage when so much of their learning takes the form of things they cannot see and touch.
Remember they will pick up and taste as they go along so handling raw meat is not advisable. I love food. I love talking about it, reading about it, creating new recipes and most of all putting large quantities of food into my mouth whenever possible. I want Sebastian to have a healthy attitude towards food and to be adventurous and I think this is the route to take. I would love to hear about your adventures with children in the kitchen.

Brighten Your Home With Accessories